These are the slides I have presented at a JSMD meetup. This happened shortly after joining Retently, where my focus was building a robust product foundation on Node.js/JavaScript platform. 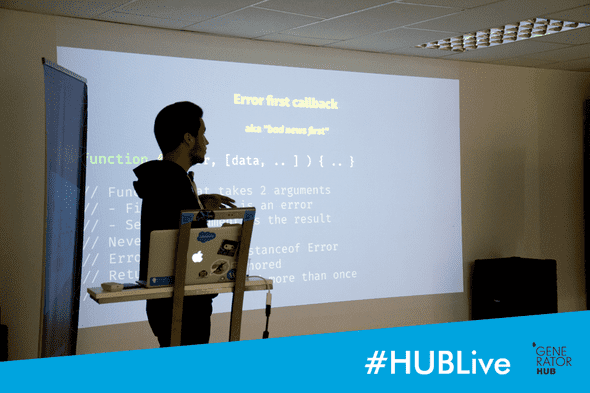 The goal was to present a high level overview of error handling and control flow, how these relate to one another in an asynchronous language like JS, and where the language design is heading.

Sentences starting with ^ are presenter notes.

Process of responding to the occurrence, during computation, of exceptions – anomalous or exceptional conditions requiring special processing.1

The order in which individual statements, instructions or function calls of a program are executed or evaluated.2 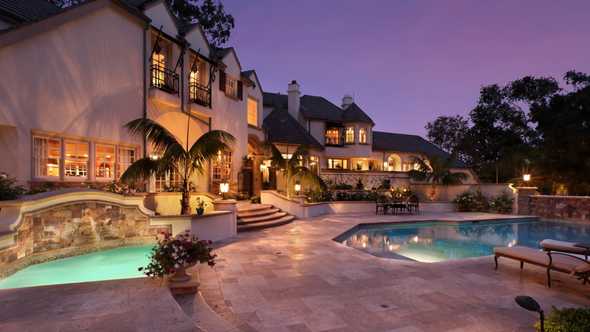 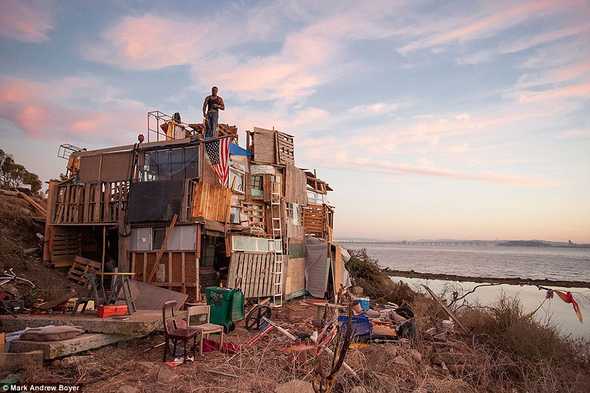 JavaScript has the fastest growing ecosystem 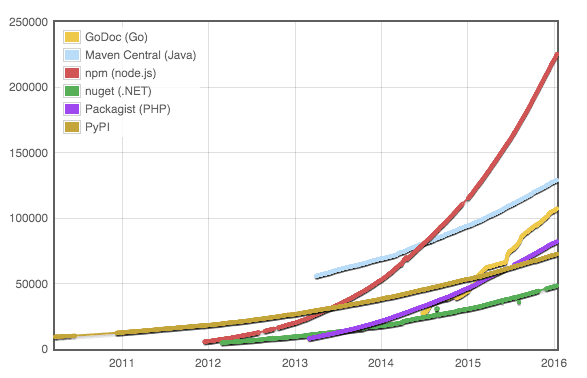 Error handling is one of the most important—and overlooked—topics for programmers.

^ Especially it is overlooked in JS ecosystem. Projects built using JS are pretty flat. Most of the time it is ok to fail completely.

^ We decided to build some complex software, using multi-layered architecture, and other enterprise design patterns which lead to a good amount of layering (composition).

^ We rely on a high amount of software other people write.

^ We want a robust ecosystem.

The First Important Discovery of the 21st Century

^ Explicit contract. We have spec!

The thing is, promises are not about callback aggregation. That’s a simple utility.

^ Many see Promises as panacea to callback hell.

The point of promises is to give us back functional composition and error propagation in the async world.

^ More importantly, if at any point that process fails, one function in the composition chain can throw an exception, which then bypasses all further compositional layers until it comes into the hands of someone who can handle it with a catch.

^ We can short circuit and throw an exception.

^ We have finally for cleaning up.

If a particular library does not return promises, it’s trivial to convert using a helper function like Bluebird.promisifyAll.

Everything is wrapped in an implicit try...catch block.

Promise.prototype.catch will catch all the errors.

No .finally in the official spec. 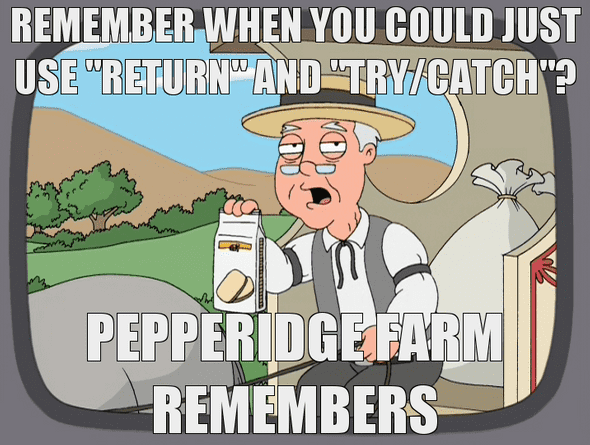 ^ Allows to hide the asynchronicity away as an implementation detail. ^ This lets us express in a very natural way what the flow of our program’s steps/statements is without simultaneously having to navigate asynchronous syntax and gotchas.

^ But it will quickly become limiting, so we’ll need a more powerful async mechanism to pair with our generators, that is capable of handling a lot more of the heavy lifting. What mechanism? Promises.

One of the most powerful parts of the ES6 generators design is that the semantics of the code inside a generator are synchronous, even if the external iteration control proceeds asynchronously.

So, use try/catch everywhere, right?

^ The reason JavaScript errors get thrown in our faces so often is that code is often not written in a robust manner.

^ Nothing could be less graceful than a try/catch around every line of code, or worse yet, just one big try/catch wrapped around everything. You should design your code to be as robust as possible, and use try/catch clauses in specific areas where it will be helpful and more graceful than just dying in the code execution.

^ Operational errors represent run-time problems experienced by correctly-written programs. These are not bugs in the program. In fact, these are usually problems with something else: the system itself (e.g., out of memory or too many open files), the system’s configuration (e.g., no route to a remote host), the network (e.g., socket hang-up), or a remote service (e.g., a 500 error, failure to connect, or the like).

^ Programmer errors are bugs in the program. These are things that can always be avoided by changing the code. They can never be handled properly (since by definition the code in question is broken).

This distinction is very important: operational errors are part of the normal operation of a program. Programmer errors are bugs.

Be clear about what your function does

^ If any of these are wrong or missing, that’s a programmer error, and you should throw immediately.

Use Error objects (or subclasses) for all errors, and implement the Error contract

^ All of your errors should either use the Error class or a subclass of it. You should provide name and message properties, and stack should work too (and be accurate).

Use the Error’s name property to distinguish errors programmatically

^ When you need to figure out what kind of error this is, use the name property. Built-in JavaScript names you may want to reuse include “RangeError” (an argument is outside of its valid range) and “TypeError” (an argument has the wrong type). For HTTP errors, it’s common to use the RFC-given status text to name the error, like “BadRequestError” or “ServiceUnavailableError”.

^ Don’t feel the need to create new names for everything. You don’t need distinct InvalidHostnameError, InvalidIpAddressError, InvalidDnsServerError, and so on, when you could just have a single InvalidArgumentError and augment it with properties that say what’s wrong (see below).

^ Do not use http error codes.

If you pass a lower-level error to your caller, consider wrapping it instead